Park defeated countrywoman Ryu So-yeon on the second playoff hole to claim the KPMG Women's PGA Championship at Kemper Lakes Golf Course in Kildeer, Illinois, on Sunday (local time). The two, along with Nasa Hataoka of Japan, finished the 72 holes tied at 10-under. Hataoka was eliminated on the first hole with a par while the two South Koreans birdied. And Park picked up her second straight birdie in the playoff to complete an impressive rally.

Park started the final round trailing Ryu by four strokes at seven-under, and didn't make a bogey over 20 holes on Sunday.

After making the championship-clinching putt, Park raised both arms in celebration and shed tears -- a rarity for a golfer who has been known to show very little emotion, positive or negative -- in tournaments.

"Actually, this is my first time being this emotional," Park told a post-round press conference through an interpreter. "I was really happy, and I couldn't help that. I think all the work I've done has paid off today. That's what really made me cry." 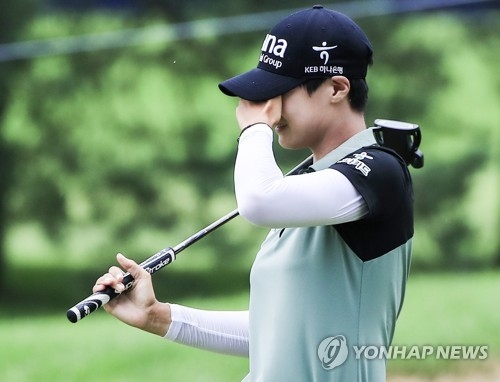 Park had a historic rookie year in 2017. She grabbed two titles, including her first major at the U.S. Women's Open, en route to sweeping the money title and the Rookie of the Year award. Park also shared the Player of the Year honors with Ryu, becoming the first rookie since Nancy Lopez in 1979 to win these three individual titles.

Park began her sophomore campaign slowly and missed two cuts in her first seven starts, after not missing any in 23 events in 2017. She finally broke through at a weather-shortened Volunteers of America LPGA Texas Classic on May 6, and her latest major title should further silence skeptics.

"This year's (major) win means a lot to me since it made me go one step forward. I think I've been waiting for this for such a long time since I've been having a tough year," she said. "I can't still believe that I'm sitting right next to this trophy. I'm really happy."

The par-4 16th hole proved to be the promised land for Park, who pulled off an incredible up-and-down for par in regulation and then clinched the title there in the playoff.

In regulation, Park was trailing Ryu by one stroke at 10-under, when she nearly put her second shot into water short of the green. The ball landed among the high grass on the slope right above the water, and Park's caddie, David Jones, had to put one foot in the water to bend down and check the lie.

From the awkward stance, Park chopped one out of the fescue and the ball landed softly to within a few feet of the cup. Park pumped her first in celebration, and went on to make par. 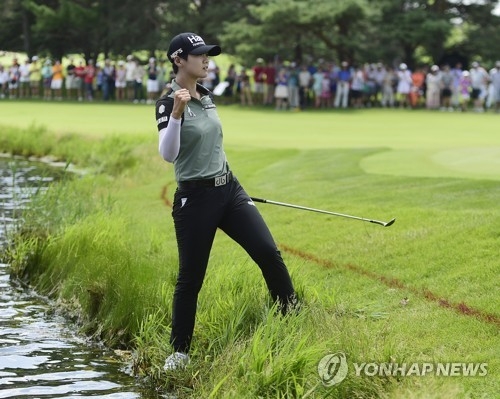 Though Ryu made birdie on the same hole to go up by two shots, she lost that advantage with a double bogey at the 17th and never quite recovered.

Park said she'd never executed a shot like that, but she didn't doubt she could pull it off.

"Since there was no water below the ball, that really gave me the confidence to do a nice shot," she said. "I did what I'd do with a bunker shot. I felt like, 'I got this,' when I did the shot."

Park said Jones, who has been on her bag since May last year, helped her stay calm in stressful situations.

"To be honest, I got less nervous during the playoff," she said. "I even made jokes with David and (that) really made me comfortable."

On the first playoff hole, Ryu was the farthest from the cup among three contestants, and she drained her long attempt from the back of the green. Hataoka missed hers, and Park, the last to putt, had to make hers to extend the playoff.

Park said she did her best to stay in the moment and not get distracted by what Ryu had done.

"I just kept thinking, 'Just do my best and do what I've always been doing,'" Park said. "This trophy gave me a lot of confidence, more than I can imagine. I have a pretty good feeling that I'll do really well in the future."