SEOUL, July 2 (Yonhap) -- Heavy rains from an approaching typhoon lashed South Korea for a third consecutive day on Monday, flooding roads and houses and causing damage to buildings in many parts of the southern and central regions.

More than 260 mm of rain have fallen on the southwestern city of Gunsan in North Jeolla Province since Saturday, with some central regions recording about 230 mm of rainfall in the same period. Seoul has received 111.5 mm.

A 53-year-old Thai woman in South Jeolla Province died after being struck by lightning on Saturday. A 73-year-old woman is under treatment after suffering minor injuries from a mudslide.

Scores of houses and stores in the southern regions of Jeolla and Jeju Island were flooded and partially damaged, leaving about a dozen people without homes or having to temporarily evacuate.

The downpour swamped over 3,700 hectares of farmlands and caused some railroads to suspend operations. Trails in 16 national parks were blocked off, while dozens of flights and ferries were halted.

Regional weather authorities have issued advisories and warnings on and off to keep residents on alert. The rains have also prompted newly-elected governors, who won their seats in last month's local elections, to skip their inauguration ceremonies and to focus on tacking the situation.

The typhoon Prapiroon is approaching the Korean Peninsula and is expected to hit the country hard on Monday and Tuesday, bringing rainfall of up to 80-150 mm per hour nationwide. 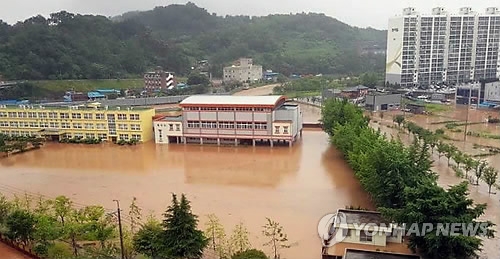