According to the survey of 500 adults nationwide by pollster Realmeter, 34 percent said conscientious objectors should spend 1.5 times longer in alternative military service, while 30.8 percent suggested the length should be two times longer.

The poll, which was carried out on June 29 after the Constitutional Court ordered the revision of the conscription law to allow for alternative service for conscientious objectors by the end of next year, has a margin of error of 4.4 percentage points and a 95 percent confidence level.

Under the current law, all able-bodied South Korean men are required to serve for around two years in the military. 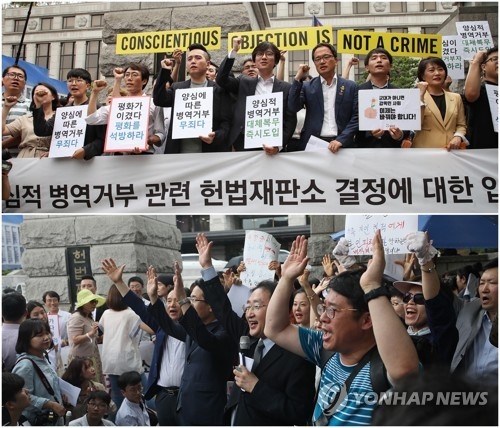 Altogether, 64.8 percent of the respondents want conscientious objectors to serve in alternative military service for around three to four years, the poll said.

Between 2013 and May this year, a total of 2,756 people have refused to serve in the military, mostly for religious reasons. Almost all of the violators served jail terms or are still on trial.

According to government data, 99.4 percent, or 2,739, of the violators were Jehovah's Witnesses, members of a sect of Christianity.

In this regard, a spokesperson for Jehovah's Witnesses told Yonhap News Agency that the group has no official position on the issue of conscientious objectors, but stressed that alternative forms of service should be unrelated to the military.

Lawyers for conscientious objectors on trial issued a statement earlier in the day, saying that many countries worldwide, including Germany and Taiwan, have successfully introduced alternative forms of service in the fields of disaster relief, firefighting, prevention of epidemics, environment and welfare services.