SEOUL, July 2 (Yonhap) -- Collective bargaining between the government and civil servants' unions resumed for the first time in 10 years on Monday in a highly symbolic move underlining the labor-friendly policies of President Moon Jae-in.

The government launched collective bargaining with unionized civil servants for the first time in 2006 when late former President Roh Moo-hyun was in office, but the negotiations were suspended in 2008 after Roh's business-friendly successor, Lee Myung-bak, came into office.

On Monday, the negotiations reopened with a meeting between government representatives, including Personnel Management Minister Kim Pan-suk, and their labor counterparts representing a total of 74 unions of government employees, including the Confederation of Korean Government Employees' Unions.

The 74 unions have a combined membership of about 230,000 mid and lower-level government employees. 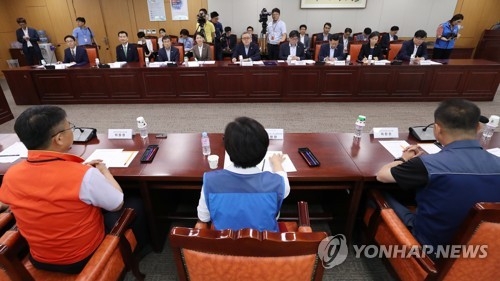 The resumption of negotiations is seen as a move underscoring Moon's labor-friendly stance. Since taking office last year, the Moon administration has taken a series of pro-labor policies, such as a sharp increase in the minimum wage and the ongoing upgrading of non-regular public sector workers into regular employees.

"I express deep regret that negotiations between the government and civil servants' unions have not functioned so far. These negotiations will be concluded successfully if we make earnest efforts to acknowledge differences and narrow them down," Kim said during the meeting.

Lee Yeon-wol, leader of the Confederation of Korean Government Employees' Unions, said that she hopes the two sides will be able to use the negotiations to address distrust and start anew.