The global guru made the remarks during a press briefing in Seoul hosted by major local brokerage Samsung Securities Co.

"Many of your trading partners are going to suffer. But you have this opening up, and if you remember what happened in China as it opened and changed, that is going to happen here and you will be the major beneficiary," the American businessman said.

Pointing to that North Korean leader Kim Jong-un spent his early days in Switzerland and he has ample knowledge about the outside world, Rogers projected that Kim will surely open up his economy.

"North Korea has lots of disciplined, educated, very cheap labor, and a lot of natural resources. And (South Korea) has lots of capital, management ability, and expertise," he said, adding that the marriage of those factors will create synergy effects to make South Korea "the most exciting country in the world over the next 10 to 20 years."

He cited tourism as one of the major sectors that will garner foreign investment in the early days of the opening. He added that investors will be successful if they jump into fields they are knowledgeable about, because North Korea "does not have anything." 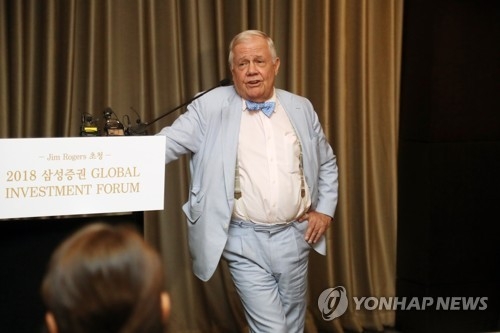 Pointing to South Korea's dependence on exports for growth, Rogers warned of possible fallout from the global economic downturn.

"Since 2008, debt everywhere has gone up a lot. Everybody has talked about austerity, but nobody practiced austerity," he said, noting that even China now has a gigantic amount of debt, meaning that it would not help save the world as it did in the global financial crisis in 2008.

He also criticized U.S. President Donald Trump for his wrangling with China over trade tariffs, saying that trade wars have never led to positive results in history.

"Ultimately we are going to have a very serious bear market and economic dislocations ... and it is going to be the worst in my lifetime, and I am the oldest in this room," the 75-year-old man said.

Holding a summit between the leaders of South Korea and the U.S. separately, Kim Jong-un vowed his commitment to the denuclearization of the Korean Peninsula in return for security guarantees and economic support.