SEOUL, July 2 (Yonhap) -- South and North Korea will focus on fostering peace and prosperity on the Korean Peninsula and preparing a framework for sustainable development in their bilateral ties when their leaders meet in the autumn summit, Seoul's unification minister said Monday.

Unification Minister Cho Myoung-gyon said that the South Korean government will make continued efforts to significantly upgrade the inter-Korean relations by accelerating the implementation of the agreement reached by President Moon Jae-in and North Korean leader Kim Jong-un in their historic summit in April.

"Our broad direction in the autumn summit will focus on allowing peace and prosperity on the Korean Peninsula to be pursued in earnest and among other things institutionalizing sustainable relations between the two Koreas," Cho told reporters during a press meeting held to mark the first year of his inauguration. 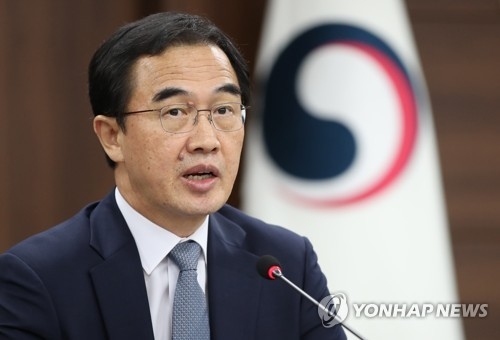 In the summit held April 27 in the truce village of Panmunjom, Moon and Kim reaffirmed their goal of complete denuclearization of the Korean Peninsula, while agreeing to halt all hostile acts against each other and expanding cross-border exchanges and cooperation.

They also promised to meet again in Pyongyang this autumn, though they did not specify a date and details.

Cho's emphasis on prosperity during the press meeting raised the possibility of South Korea pursuing large-scale inter-Korean economic cooperation by the time the leaders of the two Koreas meet in the autumn.

A unification ministry official cautioned against reading too much into Cho's comments, though he admitted that at the heart of prosperity on the Korean Peninsula lies inter-Korean economic cooperation.

"But our plan is to make preparations for us to launch inter-Korean economic cooperation in full swing immediately when the time is right by narrowing the time gap as much as possible," he said on condition of anonymity.

He noted that it appears that the North Korea leader is firmer in his stance to push for economic reform and opening up than ever.

Following the April summit, a flurry of diplomacy has been under way surrounding the Korean Peninsula.

Moon and Kim met at Panmunjom in May in what was their second summit in two months. Kim also met with U.S. President Donald Trump in Singapore on June 12 during which the North Korean leader reaffirmed his commitment to denuclearization.

The two Koreas have also ramped up their cross-border talks since the April summit meeting. They have held and are scheduled to hold working-level talks for cooperation in diverse areas, including railways, roads and forestry.

Full-fledged inter-Korean economic cooperation, however, has not been discussed yet as it is banned under multilayered international sanctions. South Korea and the U.S. have said that there will be no sanctions relief until the North's denuclearization.

Cho, meanwhile, said that the Seoul government will work hard to create a "virtuous" cycle between progress in inter-Korean ties and advance in the relations between North Korea and the U.S. going forward.

The minister said that he will visit North Korea this week, leading South Korea's delegation to North Korea ahead of inter-Korean friendly basketball matches in Pyongyang. He declined to disclose details of his itinerary, including whether he plans to meet the North Korean leader Kim during his stay there.

Koreas to push in earnest for peace, prosperity in autumn summit: Seoul official

Koreas to push in earnest for peace, prosperity in autumn summit: Seoul official