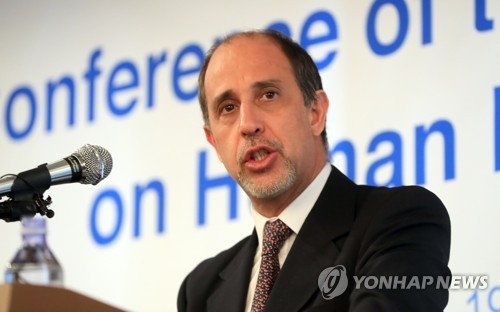 He arrived here earlier in the day for a weeklong trip meant to collect information for a report to be submitted to the U.N. General Assembly session in October.

Cho referred to a recent inter-Korean agreement to resume the reunion of families separated by the 1950-53 Korean War, a fruit of the ongoing dialogue mood spurred by summit diplomacy.

Cho was quoted as telling the U.N. envoy, "The strengthening of exchanges and cooperation with North Korea through such progress is expected to have a positive effect on a substantive improvement in the human rights of North Korean residents."

Quintana hoped for the momentum to go on and emphasized the importance of cooperation with the U.N. authorities in dealing with the human rights issue, the ministry said.

During his fourth visit to South Korea as a top U.N. investigator on the North's human rights abuse, he also plans to meet with Ministry of Unification officials, North Korean defectors and civic group officials.