Cho, 69, has been under investigation over suspicion that he dodged over 50 billion won (US$45 million) worth of inheritance tax and embezzled some 20 billion won from company funds by unfairly awarding business contracts to companies controlled by his family.

Prosecutors believe he failed to report to tax authorities about his overseas financial accounts known to exceed a combined 1 billion won.

But prosecutors have left out the charge regarding the unpaid inheritance tax for now, saying further investigation is necessary to build the case.

The head of South Korea's national flag carrier is also accused of pocketing ill-gotten profits from running an illegal pharmacy near a university with ties to his business empire, and paying lawyer fees for his family with company funds.

He faces charges of embezzlement, breach of trust, fraud and violating laws regarding taxes and pharmaceutical affairs, prosecutors said.

Cho is expected to be arraigned on the arrest warrant by a court later in the week. He was questioned for 15 hours by prosecutors last Thursday.

The request for Cho's arrest comes less than two weeks after his wife, Lee Myung-hee, avoided arrest for a second time as a court twice declined to issue her writs for multiple assaults of employees and illegal hiring of foreign housekeepers.

Cho's two daughters have also undergone probes by law enforcement in recent months on charges that are similar to their mother's, including the eldest heiress, Hyun-ah, who's also famous for the 'nut rage' incident. 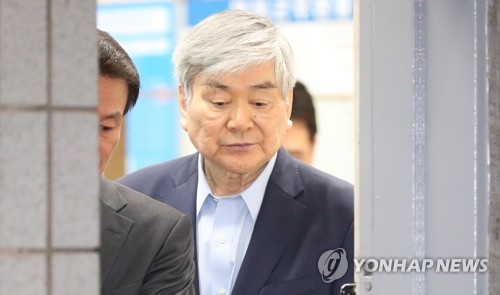