SEOUL, July 2 (Yonhap) -- E-Mart Inc., South Korea's largest discount store chain operator, said Monday it will establish charging stations for electric vehicles at all of its stores in the next three years in line with the government's push to boost zero-emission cars.

The charging stations will be available at E-Mart's 140 hypermarket outlets throughout the country by 2021, four of which will launch the service in the eastern coastal cities of Sokcho and Gangneung this week, it said.

Six more outlets are set to launch the service within this year, with each station prepared with an average of nine chargers, according to the company.

E-Mart said it takes about 20 minutes to fully charge an electric car using a rapid charger at a cost of roughly 7,000 won (US$6). It also said slow-charging, which takes about four hours, will be available.

The share of EVs in the sales of eco-friendly vehicles in South Korea has surpassed 20 percent for the first time this year on the back of a wide range of lineups and improved charging infrastructure, according to industry data.

A total of 5,542 electric vehicles were sold in the first four months, taking up 22.7 percent of the eco-friendly car market, according to data compiled by the Korea Automobile Manufacturers Association.

Industry watchers expect sales of electric cars and other environmentally-friendly vehicles to increase in the coming years as the government plans to strengthen regulations on diesel-powered vehicles while building more charging stations and continuing subsidies for motorists who drive electric cars.

Global carmakers have been racing to go electric amid tightened regulations on emissions of greenhouse gases that scientists say are to blame for global warming. 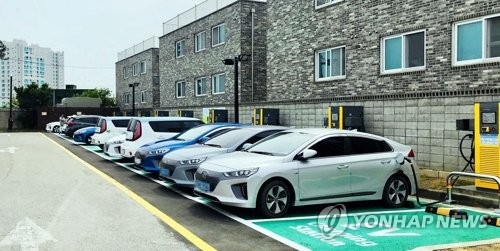