Koo appeared at his office located on the 30th floor of LG's headquarters in Seoul on Monday, which was his first day at work as the chairman.

His office was located right next to that of his late father, which is set to be preserved in honor of the late tycoon.

Instead of holding an official ceremony, Koo delivered a brief message to staff via an internal company website.

Koo said he will develop the so-called "LG Way," centering on creating value for consumers, respecting people, and carrying out morally correct management, in order to strive for a "sustainable" LG.

Koo, who was adopted by LG Group's late Chairman Koo Bon-moo in 2004 from his younger brother Koo Bon-neung, was named the newest board member and the CEO of the conglomerate's holding company, LG Corp., on Friday.

Despite his debut as the group's leader Monday, the young Koo did not release any statements to LG staff.

"Koo is expected to refrain from making public appearances and to instead focus on on-going issues related to the group's management," an official from the holding company said.

The regular seminar of executives, which is normally held in July, will also not take place this year, industry sources said.

The seminar, which had been chaired by Koo Bon-moo, was recently led by his brother Koo Bon-joon when the late tycoon was hospitalized.

Industry watchers expect Koo Kwang-mo to chair a biannual business report session slated for November as his first official event. The session in the first half of this year was chaired by LG Vice Chairman Ha Hyun-Hoi. 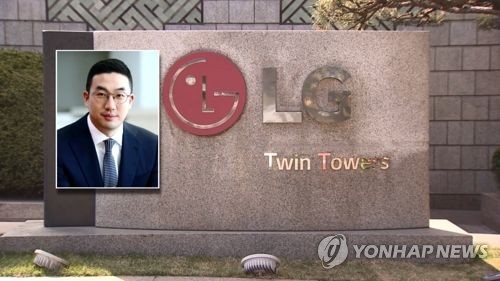