"The reduction in working hours went into effect as of yesterday. It will be an important opportunity to move away from a society of overwork and move toward a society of spending time with families," the president said in a weekly meeting with his top aides held at his office Cheong Wa Dae.

"The most important thing is that it will be a fundamental solution to protecting the lives and safety of the people by reducing the number of deaths from overwork, industrial accidents and sleep-deprived driving," he added. 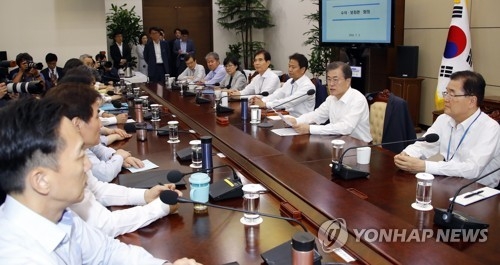 Moon said the reduction in working hours will also lead to new jobs, noting the country's workers put in at least 300 hours more than the annual average working hours of workers in other member countries of the Organization for Economic Cooperation and Development (OECD).

"It is also the most certain and most effective measure to share jobs in the era of slow growth as seen in other countries," he said.

The president insisted the cut in working hours will also lead to a rise in the productivity of workers.

"As seen in the outcome of a study by the National Assembly Budget Office, a 1 percent cut in weekly working hours leads to a 0.79 percent increase in labor productivity. Our firms too will be able to enjoy an improved competitiveness through creativity and innovation based on an increased productivity," he told the meeting.

Monday's meeting was the first of its kind since Moon was forced to take a two-day leave after coming down with the flu last week.

The president congratulated the inauguration of new local governments chiefs elected in the June 13 gubernatorial and mayoral elections.