BEIJING, July 2 (Yonhap) -- China appears to be slowing the pace of its tourism sector cooperation with North Korea, apparently in the face of complaints from the United States, industry sources said Monday.

The North's flag carrier Air Koryo was to launch a charter flight service between Pyongyang and Chengdu in northwestern China on June 28 but canceled the plan on the same day, the sources said, adding that any rescheduling plan has yet to be announced.

"All group tour packages using the Chengdu-Pyongyang charter flights were booked until early July. But sales have now been halted. It has been known that the suspension was caused by political reasons," an industry official said. 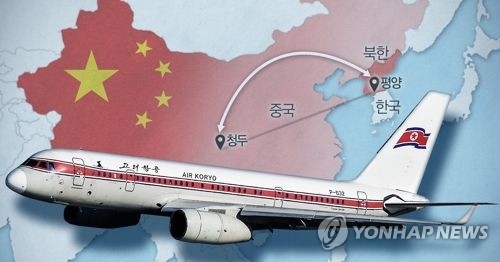 Another tourism agency official speculated that outright cancellation of the planned Chengdu-Pyongyang charter flight route cannot be ruled out.

Following North Korean leader Kim Jong-un's visit to Beijing on June 19 for his third summit talks with Chinese President Xi Jinping, China showed signs of easing sanctions on the North, particularly in the fields of aviation and tourism.

But after Washington reportedly warned Beijing not to loosen anti-North sanctions before its complete denuclearization, the Chinese authorities appear to be controlling the pace of economic cooperation with the North, the sources said.

In accordance with the changing atmosphere, China's plan to launch a new aviation route between Xian, Shaanxi Province, and Pyongyang during July could be delayed or canceled, they said.
(END)

China may slow pace of tourism cooperation with N. Korea after U.S. protest

China may slow pace of tourism cooperation with N. Korea after U.S. protest