SEOUL, July 3 (Yonhap) -- The turnover ratio of South Korean stocks marked sharp growth in the first half of this year in line with a rise in market volatility, data showed Tuesday.

During the first six months of this year, the turnover ratio of shares listed on the country's main bourse KOSPI came to 152.10 percent, up 42.07 percentage points from the same period last year, according to the Korea Exchange (KRX).

The figure for shares on the tech-heavy KOSDAQ market came to 284.87 percent, up 127.60 percentage points over the cited period, it added.

As a measurement of how many times a listed stock is traded, the turnover ratio is calculated by dividing trade volumes during a certain period of time by the number of listed shares.

"The increase in this year's turnover ratio seems attributable to growing market volatility, due mainly to a peace mood on the Korean Peninsula, trade fictions involving major economies and the government's extended backing for the KOSDAQ market, among others," the KRX said in a statement.

By sector, bio and pharmaceuticals tend to have shown a high turnover ratio on the KOSPI market, while textile and non-metal firms were found to be traded actively, the data showed. 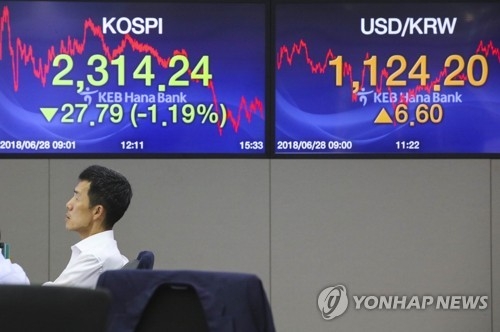