Lee, during a joint news conference with Luxemburg's Prime Minister Xavier Bettel, said that the two sides also discussed ways for talented South Korean workers to get jobs in the European nation as it wants to attract talented foreigners in finance, healthcare and other areas.

Lee welcomed two memorandums of understanding signed on the occasion of Bettel's visit, one calling for cooperation between the chambers of commerce of the two countries, and the other between the fintech laboratory of the Seoul city government and Luxumburg's fintech center.

Lee said he briefed Bettel on Seoul's efforts to peacefully resolve the North Korea nuclear issue and bring permanent peace to the Korean Peninsula, and Bettel expressed support for those efforts and promised to cooperate closely for peace and denuclearization of the peninsula.

Bettel arrived in Seoul on Sunday for a four-day visit. He is Luxembourg's first prime minister to visit South Korea in 18 years. 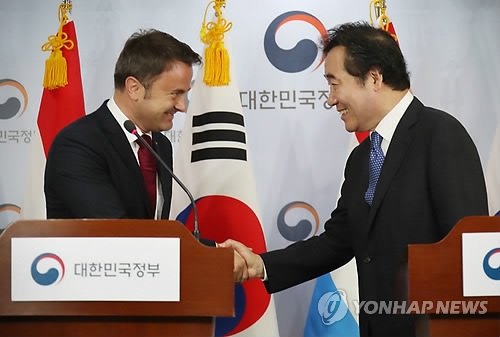