Ministry spokesman Lu Kang made the remarks in a regular media briefing, commenting on a series of recent inter-Korean contacts, including general-level talks, an agreement to hold a reunion of separated families in August and the reopening of a military communication line.

"(China) is pleased to see the two Koreas actively engage in bilateral contacts in various fields and produce a lot of outcomes based on mutual understanding. We want the two Koreas to continue to push for cooperation and implement agreements from two summit talks between their leaders," said Lu. 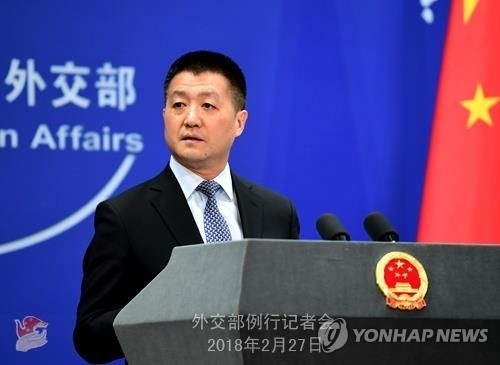 "We want the two Koreas to solidify mutual trust, improve relations and play an active role in further detente on the Korean Peninsula."

Asked to comment on some U.S. media reports on suspected expansion of missile manufacturing facilities in North Korea, Lu said he doesn't know if there are any grounds for those reports.

With regard to the ongoing visit to China by North Korea's vice minister of external economic affairs, Ku Bon-tae, Lu only said, "North Korea and China, as friendly neighboring countries, have maintained normal exchanges in many fields. But I have no concrete information to offer on his visit."
(END)