Pompeo will be in North Korea through Saturday "to continue consultations and implement the forward progress" made by the two leaders at their Singapore meeting, the State Department added in a statement. 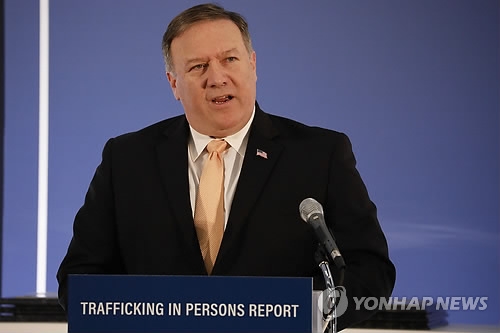 At a regular press briefing, Sanders said the top U.S. diplomat will meet with the North Korean leader and his "team."

"We are continuing to make progress. We had good meetings yesterday," she said, referring to Sunday's talks at the inter-Korean border between U.S. Ambassador to the Philippines Sung Kim and North Korean Vice Foreign Minister Choe Son-hui.

The summit yielded a joint statement that committed Kim to work towards the "complete denuclearization" of the Korean Peninsula in exchange for security guarantees from the U.S.

Pompeo is the U.S. point man for North Korea negotiations. He made two trips to Pyongyang in the run-up to the summit to determine whether the regime was serious about giving up its nuclear and ballistic missile programs.

Multiple news reports have cited U.S. intelligence sources as questioning the North's commitment to denuclearize over findings that point to a build-up of nuclear-related facilities in the reclusive nation.

The reports accuse Pyongyang of deceiving Washington in order to extract as many concessions as possible.

And asked to clarify U.S. National Security Adviser John Bolton's remark that North Korea's nuclear program could be dismantled in a year if the regime is willing, she responded, "There's great momentum right now for positive change."

Pompeo will travel to Tokyo after Pyongyang to meet with Japanese and South Korean leaders on their "shared commitment to the final, fully verified denuclearization" of North Korea, according to the State Department statement.

He will then hold similar discussions in Hanoi with senior Vietnamese officials.