Oh gave up a go-ahead run in the top of the 10th inning against the Detroit Tigers at Rogers Centre in Toronto on Monday (local time), as the Jays fell 3-2.

The right-hander took over from Tyler Clippard to start the 10th inning, with the score knotted at 2-2. After getting James McCann to ground out to shortstop, Oh served up a triple to Niko Goodrum.

Jose Iglesias then drove him home with a sacrifice fly to right field. Oh struck out JaCoby Jones to end the inning, but the damage had been done.

The Jays couldn't muster up any offense in the bottom half of the inning, as Oh fell to 4-3 for the season.

His ERA went up from 3.05 to 3.20. Oh hadn't given up an earned run in his previous four appearances. 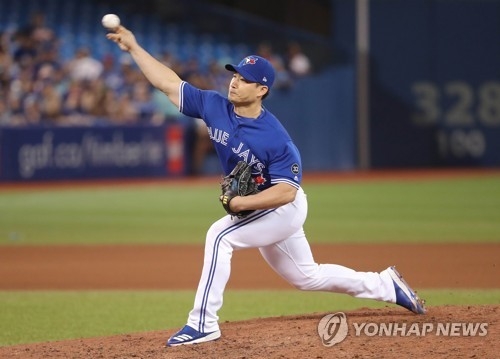 This was his first outing in July. Oh opened June by allowing six earned runs in his first 1 2/3 innings but then limited opponents to one earned run over his next 11 1/3 frames.

The Blue Jays' All-Star closer Roberto Osuna is serving a 75-game suspension for violating Major League Baseball's domestic violence policy, and the club has said the right-hander will once again be its closer when he's eligible to return on Aug. 5.

Clippard and another right-hander, Ryan Tepera, have shared closing duties in Osuna's absence. But Tepera was placed on a 10-day disabled list last week with elbow inflammation, which could open doors for Oh, who recorded 39 saves for the St. Louis Cardinals the past two years, to get some save opportunities.

Oh's last save came on June 25 against the Houston Astros, when Tepera was not available following back-to-back appearances.