NEW DELHI, July 3 (Yonhap) -- Hyundai Motor Co.'s sales in India are expected to exceed the 500,000-unit mark for a third year in 2018 thanks to its diversified lineup, industry watchers said Tuesday.

Hyundai Motor, South Korea's top automaker, sold 229,765 vehicles in the Indian market between January and May this year, up 6.4 percent from a year earlier, according to data from the Society of Indian Automobile Manufacturers.

Hyundai Motor posted the second-highest market share of 15.8 percent in Asia's third-largest economy after Maruti Suzuki of Japan with 51.6 percent.

The South Korean carmaker was followed by Mahindra & Mahindra of India with 7.3 percent, Tata Motors of India with 6.4 percent and Honda Motor of Japan with 4.5 percent.

Hyundai's strong sales in India were led by three popular models -- the small hatchbacks Grand i10 and Grand i20, and the Creta small crossover utility vehicle (CUV). 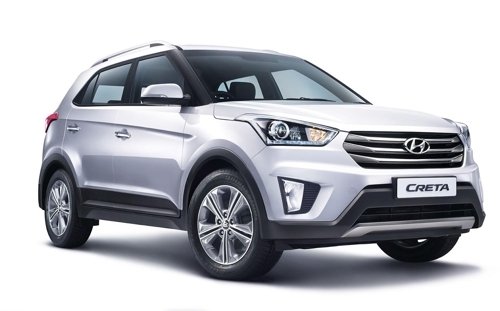 The Creta, which made its debut in India in 2015, became the best-seller among all SUV models and was named the Car of the Year there the next year.

Hyundai Motor currently operates a plant in Chennai, which kicked off production in September 1998. As of the end of last month, the cumulative number of vehicles produced at the plant exceeded 8 million units

In a bid to tap deeper into the fast growing Indian market, Hyundai Motor plans to invest US$1 billion in India by 2020 and roll out nine new models. The company is also seeking to debut an electric car in the subcontinent next year.

Meanwhile, Kia Motors Corp., Hyundai's smaller affiliate and South Korea's No. 2 carmaker, plans to complete a 300,000-unit-a-year plant in the state of Andhra Pradesh in eastern India in the second half of next year. Kia has invested $1.1 billion to build the factory.

Industry watchers said Hyundai Motor and Kia Motors have been expanding their investments in India due to its great growth potential.

According to the Korea Automobile Manufacturers Association, India outstripped Germany and became the world's fourth-largest car market last year after China, the United States and Japan, with its demand reaching 4.02 million. In particular, India is widely expected to emerge as the No. 2 auto market in the world in 2020.
(END)