SEJONG, July 3 (Yonhap) -- South Korea's corporate watchdog said Tuesday a holding company structure adopted by most conglomerates is a tool to help strengthen the founding family's grip over affiliated firms, rather than to improve the transparency of management.

Conglomerates' holding companies are also heavily reliant on intra-group trading, and have expanded their presence in so-called second-tier and third-tier subsidiaries in their multiple levels of affiliates, instead of increasing investment in their first-tier subsidiaries, according to the Fair Trade Commission (FTC).

The number of holding companies in the country has increased sharply amid government efforts to encourage businesses to adopt more transparent and simpler shareholding structures.

There were a total of 193 holding firms last year, up from 162 tallied a year earlier.

That was the largest on-year rise since the holding company system was introduced in 1999 under the fair trade law, the FTC said.

South Korea's conglomerates have been under fire for years as many rely on controversial cross-shareholding arrangements among their affiliated companies to strengthen their owning families' control over the entire group.

The government has encouraged big-name business groups to convert themselves into holding companies to resolve their cobweb-like family-run governance structures.

But concerns have been rising that the scheme is being used to further strengthen business group owners' control over many companies. 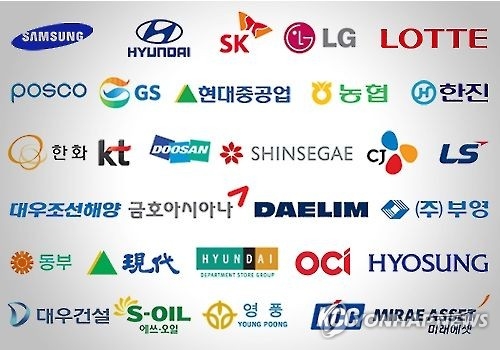