The 100-strong delegation departed for the North at around 10 a.m. on two military airplanes flying from an airport in Seongnam, south of Seoul.

The two Koreas plan to hold four basketball matches in Pyongyang on Wednesday and Thursday. They will include games between teams comprised of a mixture of South and North Korean athletes. 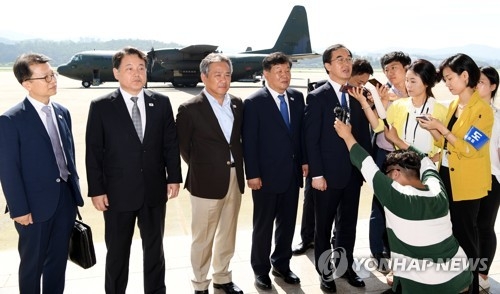 This is the fourth time in history that the two Koreas have held friendly basketball matches. The last such games were played in October 2003.

"We are leaving to join the unification basketball matches to be held for the first time in 15 years, an event which is part of efforts to follow up on the Panmunjom Declaration," Cho told pool reporters, referring to the agreement the leaders of the two Koreas adopted after their April summit.

"I hope that as the PyeongChang Winter Olympics served as foundation for peace, the unification basketball matches will serve as a chance to advance peace on the Korean Peninsula," he added.

Cho said that it is particularly meaningful in that the games will be held around Wednesday when the two Koreas will commemorate the announcement of their joint communique in 1972.

The matches were arranged after high-level officials from the two Koreas met in June to discuss sports exchanges in line with the spirit of the April 27 summit, where their leaders promised to expand cross-border exchanges and contacts.

The rapprochement also led to summit meetings between South Korean President Moon Jae-in and North Korean leader Kim Jong-un in April and May.

The inter-Korean basketball matches coincide with a planned trip by U.S. Secretary of State Mike Pompeo later this week to work out details for dismantling the North's nuclear weapons program.

His trip to Pyongyang is the first of its kind since U.S. President Donald Trump and North Korean leader Kim met in Singapore last month. Kim affirmed his commitment to complete denuclearization of the Korean Peninsula.

Meanwhile, other information on the schedules of the delegation has yet to be disclosed. Cho, who handles inter-Korean affairs, earlier declined to provide details of his itinerary, including whether he plans to meet the North Korean leader during his stay in North Korea. 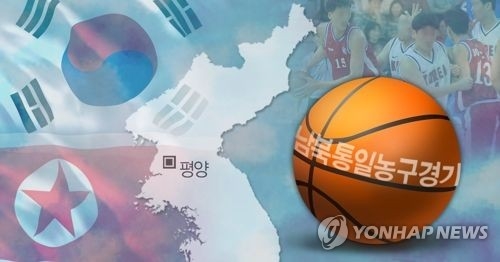