SEOUL, July 3 (Yonhap) -- A revised bilateral trade agreement calling for a 20-year extension of tariffs on Korean pickup trucks is expected to reduce the United States' imports by over 60,000 vehicles under the most likely scenario, a report by the U.S. International Trade Commission (ITC) said Tuesday.

Seoul and Washington in March agreed in principle to revise the free trade agreement (FTA), which includes delaying the elimination of 25 percent duties on Korean trucks until 2041. The duties were set to be phased out from 2019 to 2021.

The ITC said it is hard to quantify the probable economic effect over a two-decade period because the U.S. currently imports few to none of the motor vehicles in question from Korea. 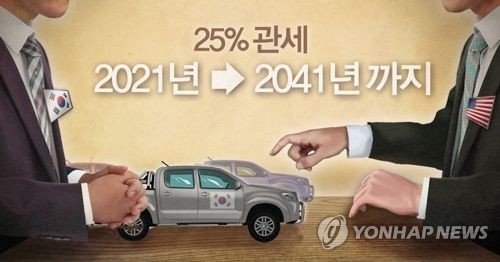 Under the third scenario, considered the most probable, the ITC said the U.S. would be able to prevent imports of 66,600 pickup trucks, or 7.1 percent of total imports of 2017, and prevent a fall in domestic production of 45,000 such models.

The commission assumed the first and second scenario would have almost no effect, while the fourth and fifth scenario could result in preventing imports of over 140,000 pickup trucks to the American market.

South Korea produced 4.1 million vehicles in 2017 to become the world's sixth-largest manufacturer, but in terms of production of light trucks, it ranked 12th globally, the commission said. The nation's trucks exports were primarily diesel pickup trucks that were exported to developing markets in Asia and South America.

Hyundai's U.S. vice president of corporate and product planning earlier this year stated that a pickup truck for the U.S. market has been approved for 2020 or 2021. The vehicles are likely based on a concept pickup truck shown at automotive shows. In 2016, SsangYong's chief executive said the company plans to sell vehicles in the U.S. as early as 2019, without giving further details of their production plan.