Pompeo plans to leave for Pyongyang on Thursday to discuss details of the communist nation's agreed-upon "complete denuclearization," according to the State Department.

It added that he is scheduled to meet "Japanese and South Korean leaders" in Tokyo shortly after his Pyongyang visit. It did not specify their names.

"Currently, consultations are under way on Foreign Minister Kang's visit to Japan and trilateral foreign ministerial talks among South Korea, the U.S. and Japan," the government official said. 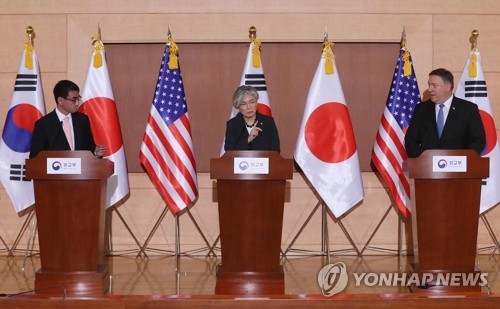 If the session is held, Pompeo will likely brief them on the results of his third-known trip to the North and exchange views on the next steps.

The secretary flew into Seoul right after the June 12 summit between the North's leader Kim Jong-un and President Donald Trump in Singapore.