SEOUL, July 3 (Yonhap) -- Foreign investors tended to focus more on global and national risk factors than on the interest rate spread with the United States before making investments in the South Korean bond market, a report said Tuesday.

According to the paper published by the Bank of Korea (BOK), the rate difference between South Korea and the United States had positively affected the net purchase of foreigners in the local bond market in the 2004-2007 period.

But the sovereign debt credit default swap premium, referring to a measure of how the market views credit risk of a country, was not a major factor that could move investors.

After the 2008 global financial crisis, however, investors were rarely affected by the rate spread, or interest arbitrage, while global or sovereign risks expanded their presence in investment.

"Empirical results show that arbitrage opportunities played an important role in the pre-crisis period (2004-07), while risk factors were more influential in the post-crisis period (2010-17)," said author Yu Bok-keun, a senior economist from the BOK. "The influence of variables other than arbitrage opportunities and risk factors may have increased."

He said the shift was largely driven by South Korea's stronger economic and financial fundamentals and a change of foreigners' portfolio and risk appetite.

Asia's fourth-largest economy saw its current account surplus shoot up to US$78.5 billion in 2017 from $3.2 billion in 2008, with its foreign reserves reaching nearly $400 billion last year, up from $200 billion nine years earlier.

Offshore investors held 71 percent of public-issued bonds in their investment portfolio in 2017, up from 10 percent in 2008. At the same time, the percentage of their short-term debt holdings fell to 28 percent from 55 percent over the cited period.

The BOK report noted that it is part of a changing trend that investors put a higher priority on low risk and low return investments than those related to high risk.

Last month, the U.S. Fed raised its benchmark fund rate a quarter of a percentage point to between 1.75 percent and 2 percent, and signaled two more rate increases by the end of this year.

But South Korea's policy rate has stayed at 1.5 percent for more than a half year, raising concerns that a higher U.S. rate may cause an outflow of foreign capital from South Korea.

In the South Korean stock market, the amount of foreign investment accounts for more than 30 percent of the market capitalization, with their bond holdings taking up some 6 percent. 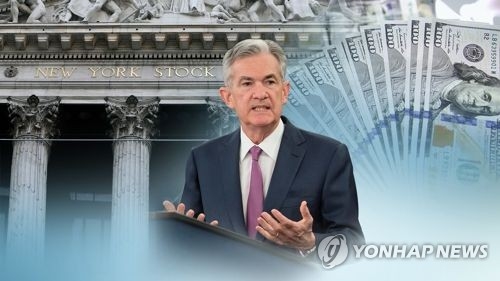