With the ongoing thaw in relations on the Korean Peninsula, hopes are high for South-North economic cooperation in transportation and humanitarian sectors. The two sides are holding working-level talks on road and railway connections.

Also, the bank will strive to downsize and engage in restructuring efforts to help reach an annual 1 trillion won (US$890 million) in profit by 2030.

"In 2030, Exim Bank will become a policy lender with expertise in overseas transactions," said Eun.

The bank suffered a net loss of 1.5 trillion won in 2016, hit by higher provisions against its loans extended to the country's ailing shipbuilding industry. It was the first time that the bank reported an annual net loss since its foundation in 1976.

Under its reform plan announced in late 2016, Exim Bank has introduced a tighter loan screening process to improve its risk assessment capability. It will close some branches and offices by the end of this year. 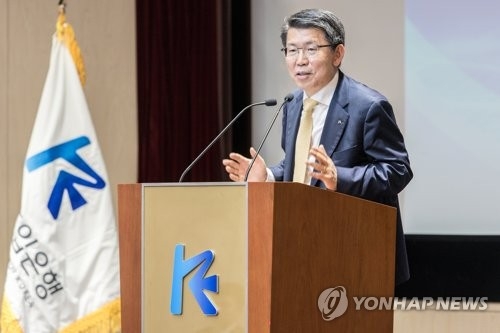