Moon made the remark during a ceremony to launch a preparatory committee for events commemorating next year's 100th anniversary of the 1919 nationwide uprising against the colonial rule and the establishment of Korea's provisional government in exile.

Moon said he discussed ways to jointly celebrate the anniversary when he held summit talks with North Korean leader Kim Jong-un in April. The two leaders held their first meeting on April 27 and then a follow-up meeting on May 26 at the border village of Panmunjom.

"If the South and the North share the history of independence movement together, they will be able to feel closer to each other," Moon said during the ceremony held at the former Seoul Station building that was built during the 1910-45 colonial rule and is now used as an art hall for exhibitions and performances.

Moon said that more than 70 years of national division has also left the history of independence movement divided, meaning that the two sides have come up with different versions of history about Korea's struggles to gain independence from Japan. 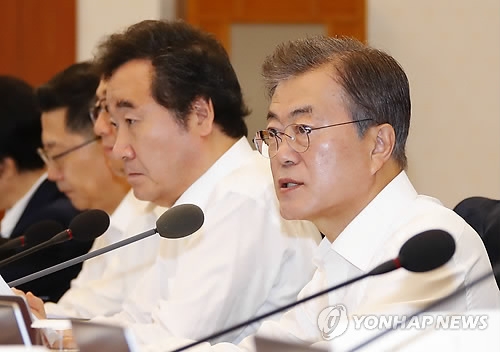 After the 1945 liberation at the end of World War II, Korea was divided into the capitalist South and the communist North. The three-year Korean War broke out in 1950 with the North's invasion of the South, and their border still remains one of the world's most heavily fortified.

However, military tensions that had run high on the divided peninsula until last year have significantly eased this year, thanks to two inter-Korean summits as well as last month's historic summit between the North's leader and U.S. President Donald Trump.

"On April 27, I and North Korea's State Council Chairman Kim Jong-un discussed ways to push for joint inter-Korean projects commemorating the 100th anniversary of the March 1st Independence Movement and included its purpose in the Panmunjom Declaration," Moon said, referring to the summit agreement.

"The preparatory committee should think about projects the South and the North can jointly push for," he said.

That is a departure from his conservative predecessors who regarded the 1948 establishment of South Korea's government as the point of national foundation.
(END)