SEOUL, July 3 (Yonhap) -- Despite suffering an early exit at the 2018 FIFA World Cup, South Korean players said Tuesday they hope football fever in Russia can boost the popularity of their domestic league.

South Korea's top-flight K League 1 will resume its 2018 season campaign Saturday with stars returning from their international duty. The second division K League 2 already started its second half schedule last weekend. The K League has been on break since May 21 for the 2018 World Cup.

"We'll have to play a better game for fans," Jeonbuk Hyundai Motors right back Lee Yong, who started in all three of South Korea's matches at the 2018 World Cup, said during a press conference at the Korea Football Association (KFA) House in Seoul. "I will try my best to recreate that World Cup fever again on the pitch." 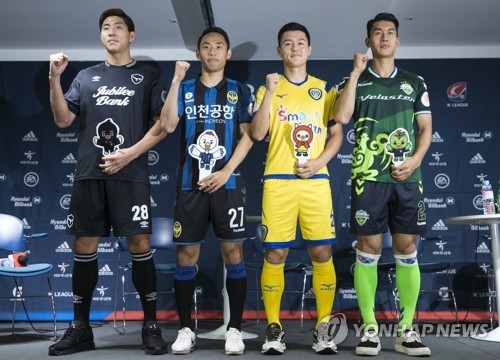 The Taeguk Warriors returned home on Friday after they failed to reach the round of 16. Among South Korea's 23-man squad for the World Cup, 12 players were from the K League.

South Korea finished third in Group F with one win and two losses at the 2018 World Cup. They lost 1-0 to Sweden and fell 2-1 to Mexico but produced a stunning 2-0 win over Germany in their final Group F match.

"I feel thankful that many fans supported us and gave a lot of energy," said Incheon United winger Moon Seon-min, who started in South Korea's last two matches. "I couldn't really show my aggressiveness when we had chances at the World Cup. It's something that I regret, but I'll try to show my offensive character in the K League."

The K League 1 teams have to play 24 more matches before the end of their season in November. Defending champions Jeonbuk are currently the leaders in the 12-team league with 34 points, nine points ahead of Suwon Samsung Bluewings.

Among South Korea's World Cup members, Ju Se-jong and Yun Young-sun are the only two players who are with second division clubs. Ju plays for Asan Mugungwha FC, while Yun competes with Seongnam FC.

Seongnam are currently the leaders in the K League 2 with 32 points, just one point above Asan.

Both Ju and Yun vowed that they'll help their respective clubs to win the second division title. The winners of K League 2 earn direct promotion to K League 1 next year.

"As a veteran, I'm ready to join our team and lead young players," said Yun, who made his World Cup debut against Germany. "World Cup experience will give me a big help. I will try to use that experience in the K League."

"We'll respond to fans' support with good and competitive games," he said. "Asan have good players and are determined to play a better game. We can catch up to Seongnam."