Moon's meeting with Kim Joo-young, leader of the Federation of Korean Trade Unions (FKTU), and Kim Myoung-hwan, leader of the Korean Confederation of Trade Unions (KCTU), took place on the sidelines of a ceremony to launch a preparatory committee for events commemorating next year's 100th anniversary of the 1919 nationwide uprising against Japan's colonial rule, sources said.

The FKTU has agreed to return to the dialogue, but the KCTU is still refusing to do so.

The meeting discussed ways to normalize the three-way dialogue on minimum wage that has been crippled by the labor side's boycott in protest of the government's revision of the minimum wage act.

"Even if there are differences in opinion, dialogue must continue," Moon was quoted by presidential officials as saying during the meeting. Officials also said Moon listened to labor leaders' views but didn't elaborate.

Labor groups have strongly complained the revision of the minimum wage act, arguing that it offsets the effect of a rise in the legal wage threshold by including bonuses and benefits into its calculation. 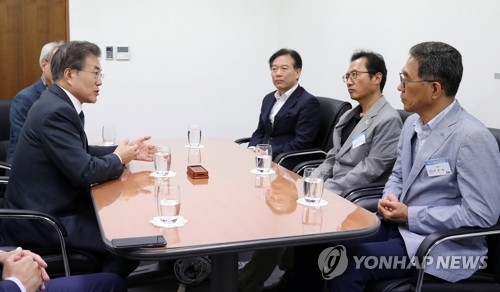