SEOUL, July 3 (Yonhap) -- The majority of Seoul citizens believe women are largely responsible for household chores, according to a household survey released Tuesday by the Seoul Metropolitan Government.

In the poll conducted in September last year on 42,687 Seoul citizens older than 15 in about 20,000 households, and 2,500 foreigners living in the capital, 26.8 percent said wives are entirely responsible for household chores.

Fifty-eight percent of the respondents said that wives are largely responsible for household chores and husbands should help a little, the survey showed. Altogether, 84.6 percent stressed greater responsibilities for women. 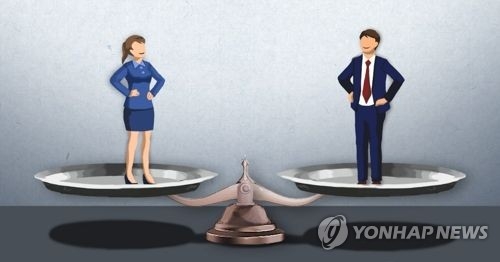 The ratio of men who do cleaning, washing and cooking at a frequency of less than once a year was 8.2 percent, 13.9 percent and 14.4 percent, respectively, the survey said.

But the perception of gender equality in household chores slightly differed depending on the age group. About 28 percent of citizens ages 46 to 55 agreed to the notion that wives are entirely responsible for chores, while the proportion fell to 13.3 percent among those aged 26 to 35.

Meanwhile, 51.8 percent of Seoul citizens singled out income as the biggest factor of social discrimination, followed by education at 43.6 percent, occupation at 40 percent, appearance at 20.7 percent, age at 14.3 percent and sex at 12.9 percent.

In case of foreign residents, 55.5 percent selected nationality as the factor of social discrimination, followed by Korean proficiency at 41.3 percent, wealth at 24.3 percent and appearance at 14.5 percent.