SEOUL, July 4 (Yonhap) -- South Korea's foreign exchange reserves surpassed the US$400 billion mark for the first time in June on a steady increase in gains from investment in overseas assets, the central bank said Wednesday.

The total value of the country's foreign exchange reserves came to a record $400.3 billion last month, up $1.32 billion from a month earlier, according to the Bank of Korea (BOK).

"Out of the total, 91.9 percent is securities, which guarantee us steady proceeds," said a BOK official, adding that the monthly figure has broken records every month since March, when it hit $395.75 billion.

"The sheer size of the foreign reserve means that we have strong economic fundamentals," he said.

The country's reserve position at the IMF stood at $1.91 billion at the end of June, while holdings in gold bullion were worth $4.79 billion during the same period, the central bank said.

As of the end of May, South Korea placed ninth in the world rankings of foreign exchange reserves. China topped the list, followed by Japan and Switzerland. 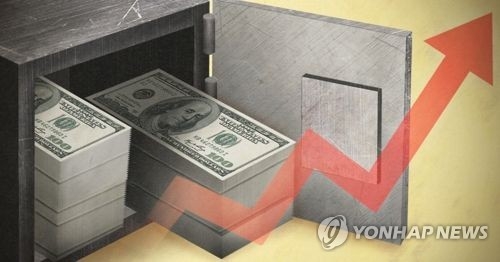