"We should deal sternly with (these crimes) from the beginning and provide special protection for victims," Moon said during a Cabinet meeting after the gender equality minister reported about measures to prevent sexual crimes, according to presidential spokesman Kim Eui-kyeom.

Moon also pointed out that women have complaints that punishment for hidden camera crimes is too light.

"This means that our society fails to properly fathom the weight of damage that women suffer, such as the sexual shame and the sense of insult," he said, according to the spokesman.

Criminal punishment has often been too weak because there is no readily apparent physical damage, Moon said.

"We must make sure that perpetrators suffer greater disadvantage than the damage they inflicted, by immediately notifying the workplaces perpetrators belong to (of the crimes they committed) after investigations are launched," he said. 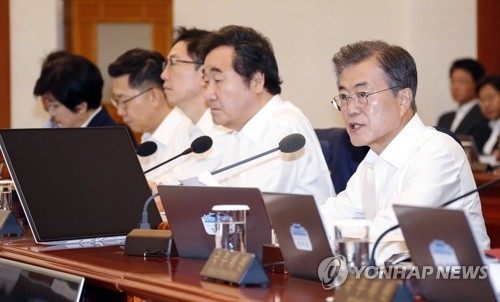