SEOUL, July 3 (Yonhap) -- When South Korea made headlines with their shocking 2-0 win over Germany at the 2018 FIFA World Cup last week, right back Lee Yong was the talk of the town in other ways as he was seen taking a groin hit.

With a minute left in regulation, Lee fell on the ground in agony after Toni Kroos' pass hit him straight in the crotch. While some fans expressed their concerns online about a possible injury, Lee said Wednesday he has no problems.

"Kroos has power, and he kicks well," Lee said of the painful moment. "This isn't the first time I took a hit in my groin, but this one was the most painful." 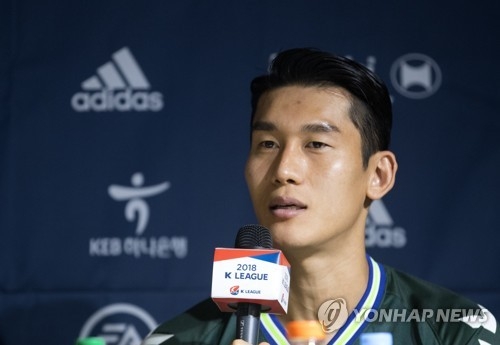 Lee said he tried to get up as quickly as possible, but it was too painful. The 31-year-old, however, played full time and saw South Korea's historic win over the defending champions.

"It was the match that everyone in the world was watching," he said. "I felt embarrassed, and I tried to get up quickly, but I just couldn't."

Lee was a starting right back for all three of South Korea's matches at the 2018 World Cup. Despite a win over Germany, South Korea failed to reach the round of 16 from Group F due to their 1-0 loss to Sweden and 2-1 defeat to Mexico.

For Lee, Russia 2018 was his second World Cup. The Jeonbuk Hyundai Motors defender was also the oldest player on South Korea's 23-man squad.

"I didn't mean to be, but I became the oldest player on the team, and I had to show something to the young players," he said. "I just thought working hard on the pitch and showing my best efforts would make our young teammates do better."

Lee said it was a pity that South Korea didn't collect a good result at the World Cup, but it was also sad to watch excessive negative comments targeting the players. Due to heavy criticism online, some players had to close their social media accounts.

"We always try to win on the pitch even if we face strong teams," he said. "But there were players who took so much blame from fans, and I had a wish that they could control their criticism. Players like Jang Hyun-soo or Kim Min-woo had a really hard time."

With South Korea's World Cup journey over, Lee said he will now display his best performance in the K League 1 with his club Jeonbuk.

"I want to thank fans for their support and attention during the World Cup," he said. "Now we're back in the K League, and I hope they can continue to send their support to players."