WASHINGTON, July 3 (Yonhap) -- The U.S. State Department on Tuesday declined to specify a deadline for North Korea's denuclearization ahead of negotiations to be led by Secretary of State Mike Pompeo later this week.

Pompeo is slated to travel to Pyongyang Thursday to meet with North Korean leader Kim Jong-un and flesh out a denuclearization agreement signed by Kim and U.S. President Donald Trump at their historic summit last month.

"I know some individuals have given timelines. We're not going to provide a timeline for that," State Department spokeswoman Heather Nauert said at a regular press briefing.

"The secretary's looking forward to having these meetings. A lot of work is left to be done, certainly. We go into this eyes wide open, with a very clear view of these conversations," she added.

Pompeo's visit will last through Saturday. Depending on scheduling, "we have at least a day and a half of meetings planned," the spokeswoman said. 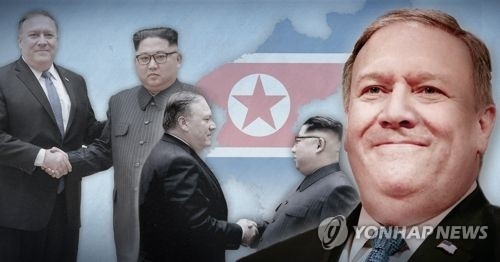 Pompeo will be making his third known visit to Pyongyang. On his two earlier trips, he also met with Kim and laid the groundwork for the summit.

Critics have lambasted the summit agreement as lacking in details in terms of the method and a timeline for denuclearization.

News reports over the weekend cited U.S. intelligence sources as questioning the North's commitment to abandon its nuclear arsenal. Many of them pointed to findings that indicate a build-up of the regime's nuclear-related facilities. They also accused Pyongyang of trying to deceive Washington in order to extract concessions without ever giving up its nuclear program.

The Trump administration has called for the complete, verifiable and irreversible denuclearization of North Korea. More recent statements out of Washington have urged a final, fully-verified denuclearization.

"There will be no surprises in terms of what we are asking them to do," Nauert said. "Our policy remains the same today as it was going into the Singapore summit."

The summit agreement also included North Korea's promise to repatriate the remains of American soldiers killed in the 1950-53 Korean War.

Nauert deferred to the Department of Defense a question about why that is being delayed, but noted it would "certainly be a good sign if North Koreans were to fulfill that commitment."