The new workweek system went into effect this month, requiring both private and public companies with 300 or more employees to reduce the maximum working hours to 52 hours per week from 68 hours.

According to state portal All Public Information in One (ALIO), 88.9 percent of 361 state-run institutions, or 321, adopted a flexible work system last year. The number was up 101 from four years earlier.

Of the total, some 87 percent, or 313 public institutions, have introduced staggered working hours, under which employees are allowed to adjust the time they come to work and leave the office. 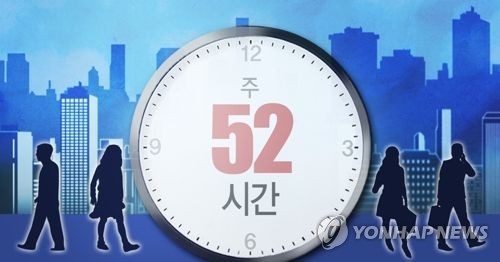 As of last year, some 102,500 employees of the 321 public institutions, or 34.4 percent of their combined headcount, were subject to flexible working hours.

The government of President Moon Jae-in has been expanding the flexible working hour system for public institutions as part of efforts to create more jobs and boost the quality of life for their employees.

Under the new workweek system, employees can work up to 40 hours of regular work and 12 hours of extra work time. Business owners can face up to two years in prison or a fine of up to 20 million won (US$17,937) for violations. For a smooth transition, firms are given a six-month grace period, during which potential violators are exempted from punishment.