SEOUL, July 4 (Yonhap) -- The foreign ministers of South Korea and the United Arab Emirates (UAE) have agreed to expand cooperation between the two countries in economy, security and other major fields, diplomatic authorities here said Wednesday.

The compromise came at the third session of the bilateral Strategic Dialogue held in Abu Dhabi a day earlier, co-chaired by Seoul's top diplomat Kang Kyung-wha and her UAE counterpart Sheikh Abdullah bin Zayed Al Nahyan, according to Kang's ministry.

The previous meetings took place in Seoul in 2012 and in New York in 2016 on the sidelines of a U.N. General Assembly session.

Kang made a two-day visit to Abu Dhabi for the talks, which focused on ways to strengthen strategic cooperation in the sectors of economy, commerce, investment, defense and culture, as well as renewable energy, infrastructure, healthcare, medical services, science and technology. 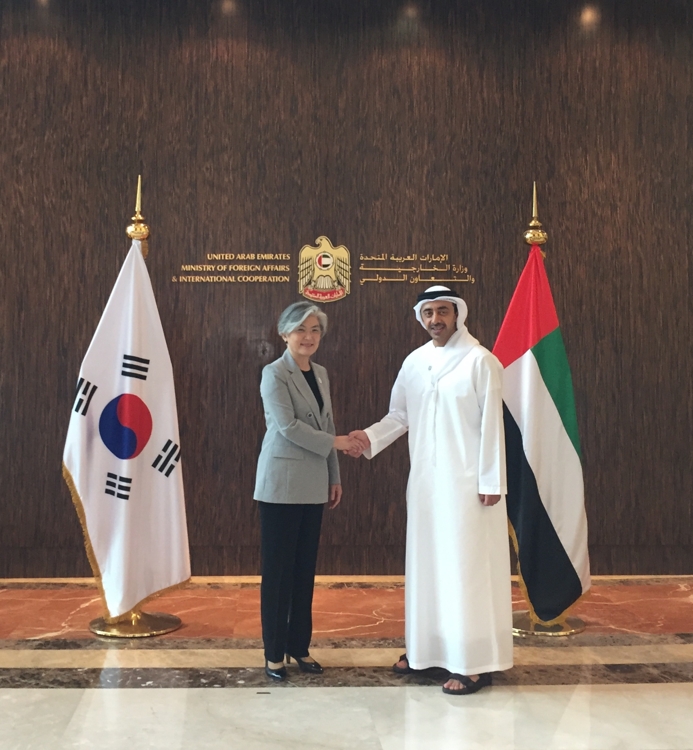 Seoul and Abu Dhabi established diplomatic ties in 1980 and have since maintained close ties.

South Korea won a US$20 billion contract in 2009 to construct four nuclear reactors in the Middle Eastern nation. It has stationed the 140-strong Akh special forces unit in the UAE since 2011 to help train local troops.

In March, President Moon Jae-in had summit talks with UAE Crown Prince Mohammed bin Zayed Al-Nahyan in Abu Dhabi. They upgraded the relationship between the two sides to a "special strategic partnership."

In the strategic dialogue, Kang stressed that South Korea and the UAE have "mutually complementary" economies. She requested the UAE minister's support for South Korean firms seeking to do business in his nation.

She noted that the UAE marks the "Year of Zayed" this year to commemorate the 100th birth anniversary of the late Sheikh Zayed bin Sultan Al Nahyan, the first president of the country, who died in 2004.