The Korea Football Association (KFA) said it is not considering Luiz Felipe Scolari as a possible new head coach for the men's national team, since the evaluation of the current boss, Shin Tae-yong, comes first before contacting other possible candidates.

Shin led South Korea at the 2018 FIFA World Cup, where the team suffered a group stage exit with one win and two losses. His contract with the KFA expires at the end of this month.

"At this point, we first have to evaluate Shin," said KFA media officer Cho Jun-heon. "We may consider hiring a new coach after reviewing Shin's performance."

The KFA's national team coach appointing committee is scheduled to hold a meeting on Thursday to review Shin's performance. The KFA will look for a new coach if it decides not to retain Shin, who took the job in July 2017.

Earlier, Brazilian media reported that KFA may replace Shin with Scolari, with some suggesting that South Korea has already contacted the 69-year-old Brazilian.

Scolari is best known for leading his home country to the 2002 World Cup title. He also guided Portugal to the runner-up finish at the Euro 2004 and fourth place at the 2006 World Cup. The former Chelsea manager also coached Brazil at the 2014 World Cup at home, where the team suffered a shocking 7-1 defeat to eventual champions Germany in the semifinals and lost 3-0 to the Netherlands in the third place match. 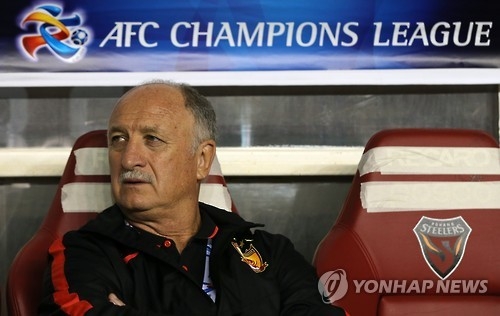