SEOUL, July 4 (Yonhap) -- With his Korea Baseball Organization (KBO) club in turmoil, Nexen Heroes' slugger Park Byung-ho says all he and his teammates can do is keep doing what they do best -- play baseball.

In the first half of this season alone, the Heroes have seen their former owner Lee Chang-suk convicted on embezzlement charges, and the club has been fined for engaging in several illegal cash-for-player trades, pocketing millions in underreported or unreported money changing hands under the table. Two of their players, closer Cho Sang-woo and catcher Park Dong-won, have been suspended by the KBO while undergoing investigation for sexual assault allegations.

Park, a two-time KBO MVP who rejoined the Heroes after two seasons with the Minnesota Twins, said the players feel helpless over the series of incidents happening around them. 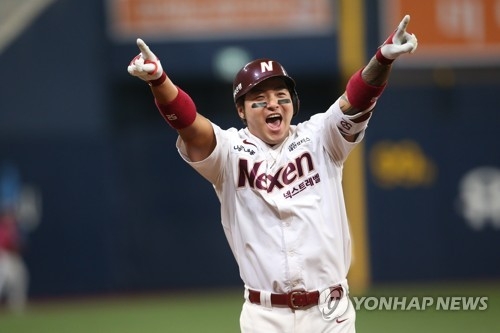 "It's not that we've just turned a blind eye to all of this, but there's not much we can do about it," Park said Tuesday before the start of a home game against the SK Wyverns at Gocheok Sky Dome in Seoul. "We come to the ballpark every day thinking playing baseball is all we can do. Each player has to focus on what he does best, and when that all comes together, it becomes a great team effort."

Park signed a four-year deal with the Twins after the 2015 season, fresh off his second consecutive 50-homer season. But Park appeared in just 62 games for the Twins in his first year, batting .191 with 12 home runs, and spent the entire 2017 season in Triple-A. He asked to be released from the remainder of his contract and returned to the Heroes before the 2018 season.

With Park joining former MVP Seo Geon-chang, 2017 Rookie of the Year Lee Jung-hoo and hard-hitting shortstop Kim Ha-seong, the Heroes quickly became a trendy preseason pick to contend for a title this year. But injuries piled up, with Park himself missing more than a month with a calf injury. Through Tuesday's game, the Heroes were in sixth place at 41-43, half a game back of the Kia Tigers for the wild card spot in the 10-team league.

Park, 31, is trying to make up for the lost time. He batted .383 with eight homers and 28 RBIs in June after putting up nine homers and 22 RBIs from March to May.

With 17 homers, Park is tied for 10th in the league, 10 behind the leader, Choi Jeong of the SK Wyverns. 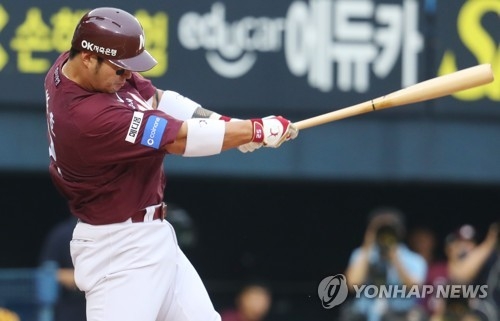 "I think I had the best month since my return in June," Park said. "I know I am far back in the home run race. I just want to keep hitting one out when the team needs it the most."

Park said he'd never set any statistical goals for himself, but the one thing he really wanted to do was play a full 144-game season. Park played every game of the 2012, 2013 and 2014 seasons, and missed just four games in 2015.

"I just hope I can stay healthy the rest of the season," Park said. "That way, I'll be able to help the team every day and put us higher in the standings."

If he had stayed put in the United States, Park would have made more money and would have had a chance to return to the big leagues at some point. But Park said he is happy where he is now, and he doesn't regret cutting his U.S. stint short.

"My life in the U.S. was good, but I put a lot of thought into returning to Korea. And so I have no regrets," he said. "I just love playing ball with this group of guys."