SEOUL, July 4 (Yonhap) -- A lawyer has been busted for brokering bogus refugee applications for Chinese nationals, sources from the Ministry of Justice said Wednesday.

The Seoul office of the Korea Immigration Service has referred the case of the 46-year-old suspect, surnamed Kang, and three others to the prosecution, recommending an indictment without physical detention on the charge of violating immigration law, ministry officials said.

Kang and his crew are accused of brokering deals for 184 Chinese nationals in helping them lodge false applications for refugee status since April 2016.

Kang allegedly advised the foreigners to write trumped-up accounts on how they were persecuted in their home country for their ties to religious cults and that it was dangerous for them to return.

Applying for asylum gave the Chinese an excuse to extend their stay in Korea, since an application review usually takes at least eight months before a decision is made.

If the application was rejected, Kang filed for another application to make them eligible for stay pending the assessment.

He is accused of charging about 2 million won (US$1,800) for each application. An applicant is known to have paid about 5 million won in total.

Five other brokers who worked with Kang were arrested earlier for their roles in recruiting the applicants.

Kang's case comes amid deepening concerns over a growing number of Yemini asylum seekers in Jeju, which has stirred a huge debate over tolerance and local immigration policy.

A total of 7,737 foreigners claimed asylum in Korea between January to May this year, up 132 percent from the same time last year, according to ministry data. 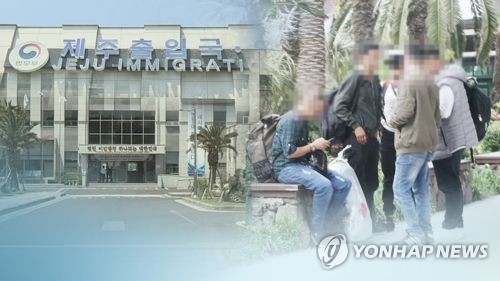