SEOUL, July 4 (Yonhap) -- The main opposition Liberty Korea Party on Wednesday sought to play up suspicions that a minor opposition party lawmaker received 50 million won (US$44,800) in illegal political funds from an associate of a power blogger at the center of an opinion rigging scandal.

The special prosecutor investigating the scandal has reportedly been looking into the suspicions that Rep. Roh Hoe-chan of the minor opposition Justice Party received the illegal political funds from the associate of the blogger known by his nickname Druking during the 2016 parliamentary election.

"Was it because of this that (Roh) opposed an independent counsel investigation?" he said.

Roh has flatly denied the allegations.

"It's not a relationship where we can give and take money," Roh said during a radio interview earlier in the day. "I never received illegal political funds from them." 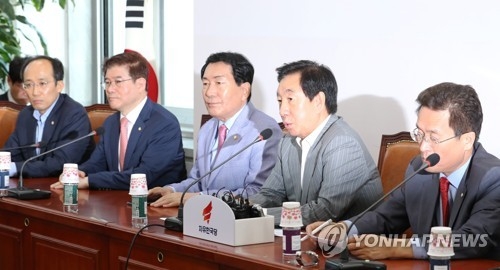 The scandal centers on allegations that the blogger, known by his nickname Druking, and his team manipulated comments on Internet news stories in an effort to sway public opinion on hot-button political issues in favor of the now-ruling Democratic Party.

Druking was found to have relations with officials of the ruling party and the presidential office, including former lawmaker Kim Kyoung-soo, who was elected governor of South Gyeongsang Province in local elections last month.
(END)