Choo extended his streak by going 2-for-3 with two walks, one RBI and one run scored against the Houston Astros at Globe Life Park in Arlington, Texas, on Tuesday (local time). The Rangers lost the game 5-3.

Choo's current streak is the longest of its kind in Major League Baseball (MLB) this year. He also has the third-longest on-base run in a single season in the franchise history, with Julio Franco's 46-game streak in 1993 topping the list.

Facing starter Dallas Keuchel, Choo struck out swinging in a seven-pitch at-bat in the bottom of the first inning. But Choo drew a four-pitch walk from Keuchel his next time up in the bottom third.

Choo got the better of the Astros' left-hander in the fifth, with an RBI single to left field that cut Houston's lead to 5-2.

Choo drew a walk off the new Houston pitcher, Chris Devenski, in the eighth inning and came around to score on a groundout to make it a 5-3 game.

The Rangers stranded the bases loaded in the eighth and couldn't muster up any offense in the bottom ninth, even after Choo reached with a two-out infield single off Hector Rondon.

During his 43-game on-base streak, Choo has reached base 96 times. 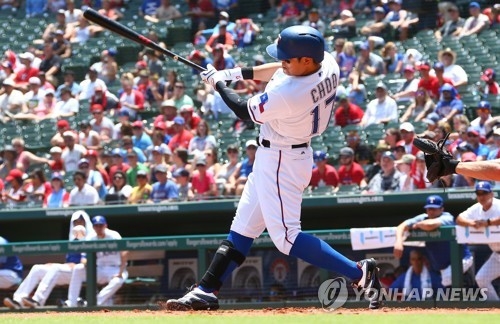