South and North Korea will hold four basketball games in Pyongyang on Wednesday and Thursday following their sports exchange talks last month. The two Koreas will first play mixed games, with the players from South and North Korea combined into two teams -- namely "Team Peace" and "Team Prosperity" -- and then the South and North's teams will go head-to-head.

The games will take place at Ryugyong Chung Ju-yung Gymnasium, which is named after the late founder of South Korea's Hyundai Group, who promoted various inter-Korean projects in the past.

"Fifteen years ago, I came here when the gymnasium was opened," Hur told pool reporters after practicing with his team at Ryugyong Chung Ju-yung Gymnasium. "It feels like something new and reminds me of old memories."

For Hur, his visit to Ryugyong Chung Ju-yung Gymnasium is his first since 2003, when the two Koreas last held friendly games. Hur then competed as a player in South Korea's 86-57 loss to North Korea. His encounter with North Korean center Ri Myong-hun, who is listed at 235 centimeters, was one of the highlights of the game.

"I remember that it made headlines when I drank soju with Ri Myong-hun and had a conversation with him," he said. "It seems like the North Korean players I saw in the past are now working in high-ranked positions, so I couldn't really talk much but just said hello to them."

The South Korean delegation for friendly basketball matches -- comprised of male and female basketball players, coaches, staff members and journalists -- landed in Pyongyang on Tuesday after flying over an hour from Seongnam, south of Seoul, on two military planes.

They attended a welcoming dinner later hosted by North Korea's culture and sports ministry at the Okryugwan restaurant.

"The taste of cold noodles at Okryugwan was somewhat different than that of 15 years ago," he said. "But I did enjoy it."

Hur also visited the Taedong River and took photos with his two sons, who are basketball players.

"It was beautiful and nice," he said. "I don't know if I'll get another chance to visit here, so I took a commemorative photo with my sons."

The men's basketball game is scheduled to start on 5:40 p.m. Wednesday after the women's match. 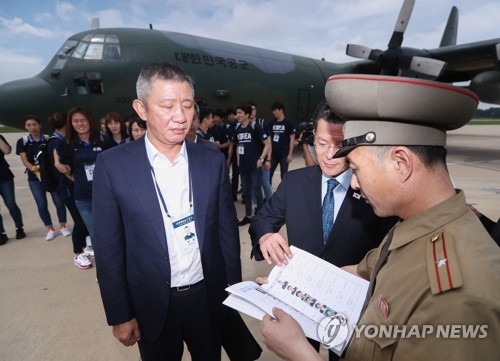