The finding reinforces views that Lee had in mind a bigger project to build a "grand canal" through the country when pushing for the Four Rivers Project with the stated goal of preserving water, controlling floods and promoting tourism.

The Lee administration spent 22 trillion won (US$20 billion) from 2008-2012 on the project. But the project has garnered constant criticism that large weirs built across the rivers worsened water quality and spread harmful green tides.

The project was also denounced by critics as a possible prelude to the grand canal project, which the construction CEO-turned-president promised during his election campaign but gave up on amid strong opposition from the public.

The Board of Audit and Inspection looked into the project over the past year and announced its results on Wednesday. It was the fourth time the agency has audited the project, a record that shows how contentious and controversial the project has been.

According to the audit results, the project began when Lee suggested it to his land minister in June 2008, two months after he announced he would give up on the grand canal project.

Later that year, the ministry outlined its plan to Lee, saying it would prevent floods by reinforcing dikes along the rivers and dredging. But Lee ordered the construction weirs and a deeper dredging of the rivers, according to the audit results.

In particular, when the ministry reported to Lee that the minimum depth of the Nakdong River running southeast in the country would be set at 4 meters and the river would be able to hold 490 million tons of water, Lee ordered the river's minimum depth should be at least 6 meters.

Presidential officials also said the river should be able to hold at least 800 million tons of water.

The ministry did not question these orders and just complied with them, the audit agency said.

In addition, the environment ministry reported to the then presidential office that the construction of weirs across the rivers could lead to water pollution, such as green tides, but the office ordered the ministry to refrain from talking about green tides, and the ministry complied, the audit agency said.

Agency officials said they tried to ask Lee why he made such orders but were unable to do so because Lee refused such interviews both face-to-face and in writing. By law, the president is not subject to the agency's audit, officials said.

The agency said a series of irregularities have been found, but they were not punishable as their statutes of limitations have already expired. 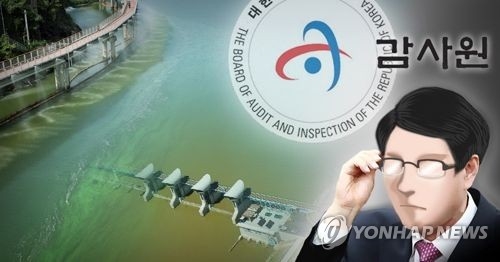