SEOUL, July 4 (Yonhap) -- South Korea's financial regulator said Wednesday that it approved the slapping of 144 million won (US$129,148) in fines on Samsung Securities Co. over its massive "fat-finger" error.

Holding a regular meeting earlier in the day, the Securities and Futures Commission under the Financial Services Commission made the decision, stressing that the brokerage caused market chaos and financial losses for investors by mistakenly issuing 2.8 billion "ghost shares" in April.

Due to one of its employees pushing the wrong keyboard button, Samsung accidentally issued 2.8 billion bogus shares worth around 112 trillion won to its employees, with 16 of them selling off a combined 5.01 million shares. This sparked public outrage over its shoddy trading system and the moral hazard of its workers, who were told to not sell the mistakenly issued shares.

Holding the firm accountable, the Financial Supervisory Service (FSS) last month called for a penalty, as well as a six-month suspension of some of its services.

The FSS also urged the regulator to suspend the firm's CEO Koo Sung-hoon and former acting chief Kim Nam-soo from their posts.

Among the watchdog's recommendations, the issue regarding the penalty was approved today, with other punishable measures to be decided later, according to the commission insiders. 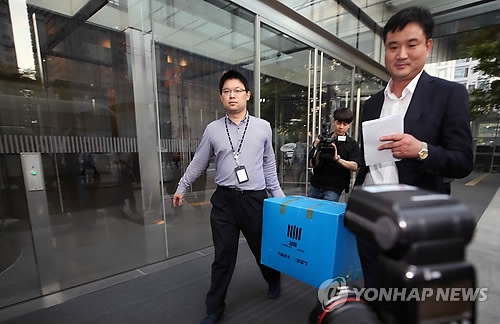