The games were played in the afternoon at Ryugyong Chung Ju-yung Gymnasium between a "peace" team and a "prosperity" team made up of a mixture of North and South Korean players. The women's teams played first followed by the men's. They were part of four planned games scheduled for Wednesday and Thursday.

Senior North Korean officials, including Ri Son-gwon, chairman of the Committee for the Peaceful Reunification of the Country, and Choe Hwi, a vice party chairman and the chief of the national sports body, came to watch the games. 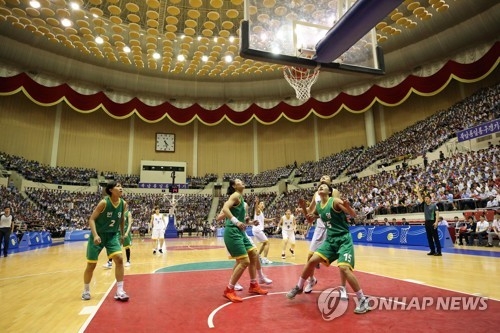 Cho told the athletes and the spectators filling the 12,000-seat gymnasium that he hopes inter-Korean sports exchanges will further expand and eventually contribute to the reconciliation and unity of the two Koreas.

"Through the Panmunjom Declaration adopted by our two leaders on April 27, the South and the North have been making their way toward a new peace and prosperity," he said, referring to the summit agreement. "At the forefront of it lies inter-Korean sports exchanges."

"In particular, I believe that this reunification basketball event held in line with the summit agreement will expand and advance sports exchanges and greatly contribute to reconciliation of our people and unity," he added.

Kim Il-guk, the North's sports minister, said that the event was possible due to a "strong aspiration" for reunification demonstrated by the leaders of the two Koreas.

The gymnasium was filled with music and cheering by North Korean spectators, some of whom used stick balloons to make noise. Placards were also seen here and there -- some of them read, "Welcome," and "We are passionately rooting for you." 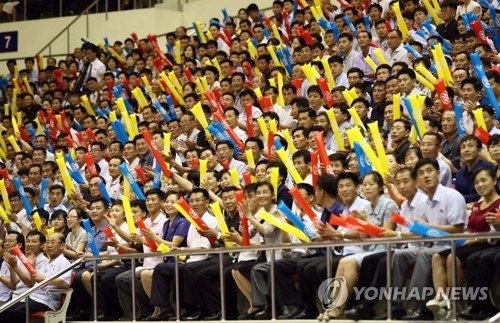 For the women's game, it was neck and neck, but the "prosperity" team managed to win 103-102. Ro Suk-yong of the North was key to the victory, scoring 18 points.

The men's game was tied at 102-102. With less than a second left on the clock, North Korea's Choe Sung-ho hit a game-tying three-pointer for the "prosperity" team. Another North Korean Won Yun-sik, meanwhile, had the game-high 17 points for "peace" team.

This is the fourth time that the two Koreas have held friendly basketball matches. The last such games were played in October 2003.

The event was arranged after high-level officials from the two Koreas met in June to discuss sports exchanges in line with the spirit of the April 27 summit, where their leaders promised to expand cross-border exchanges and contacts.

The rapprochement led to summit meetings between South Korean President Moon Jae-in and North Korean leader Kim Jong-un in April and May.

The North's leader, known to be an avid fan of basketball, was not seen at the gymnasium. It is unclear whether he will attend the other planned matches.