SEOUL, July 4 (Yonhap) -- South Korea's mainstream Buddhist order has set out to build a large-scale complex in a southern city to provide experiences of "Seon" meditation, better known as Zen meditation, to Buddhist followers as well as ordinary people, a committee in charge of the project said Wednesday.

Under the plan led by the Jogye Order's Bongam Temple and a group of Seon monks, the Mungyeong Global Meditation Village will be created in the southern city of Mungyeong, North Gyeongsang Province, by 2021, according to the committee.

The complex will feature meditation facilities, accommodations, cafeterias and other amenities over some 120,000 square-meters of land at the foot of the city's Mount Heeyang. The facilities are designed to accommodate as many as 300 people at the same time.

The project was devised to globally promote the Korean Buddhism's school of Seon, characterized by its emphasis on rigorous self-control, meditation and practice. A similar Japanese Buddhist school is more widely known as Zen.

"Buddhism is declining and the country is facing many issues while all of humanity is witnessing a serious discrepancy between the material world and the spiritual world," Monk Euijeong, the head of the committee, said in a press conference.

"Seon should be in the lead of the civilization of the 21st century and (we) also plan to revive the spirit of Seon in South Korea to reach out to the world," he said.

He also said the Buddhist sector plans to make it easier for ordinary Buddhist followers and other civilians to gain access to the meditation technique of the Seon school.

The groundbreaking ceremony for the construction is set for next week with a plan to finalize the building of the complex by the end of 2021.

A budget of 29 billion won (US$26 million) will be funded by financial support from the central and local governments as well as donations from the Buddhist order and followers.

The complex will be built in the style of traditional Korean temples and will provide a range of meditation programs when it opens after 2021. 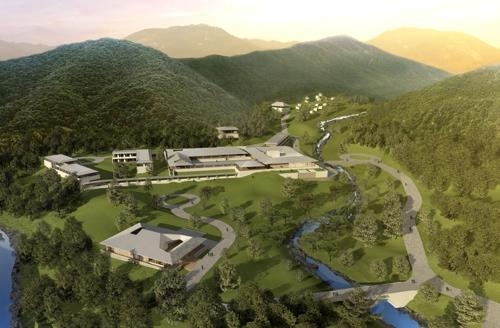