SEOUL, July 4 (Yonhap) -- The Vatican's top diplomat, Archbishop Paul Gallagher, arrived in South Korea on Wednesday for a six-day trip, which will include a meeting with President Moon Jae-in and a trip to the heavily fortified border with North Korea.

He will officially start his itinerary on Thursday with a courtesy call on the president in the morning before traveling in the afternoon to the Demilitarized Zone, the inter-Korean border. He will inspect the construction site of a Catholic cathedral inside the Joint Security Area alongside the border.

On Friday, he is scheduled to hold talks with his South Korean counterpart, Foreign Minister Kang Kyung-wha, as well as to meet with around 45 Catholic lawmakers.

Over the weekend, Gallagher plans to speak at a Catholic symposium on peace and human rights and attend a Catholic service at Myeongdong Cathedral in central Seoul before leaving the country on Monday.

He told Yonhap News earlier that the results of the recent summit meetings between President Moon and North Korean leader Kim Jong-un, as well as between Kim and U.S. President Donald Trump, need to be further advanced to bear practical progress going forward.

He was previously the Holy See's ambassador to Guatemala and Australia. 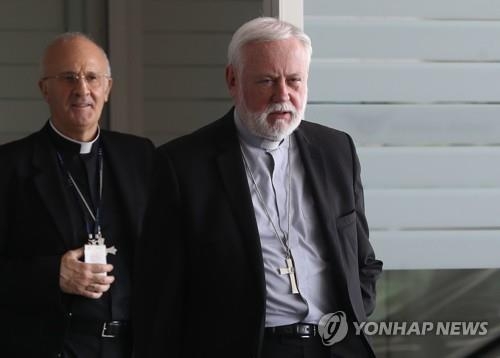