The chaos erupted as Asiana Airline Inc.'s outsourcing deal with LSG Sky Chefs, an affiliate of German airline Lufthansa AG, expired at the end of June, but temporary catering partner Sharp Do & Co Korea has failed to deliver meals to some Asiana flights since Sunday.

"We deeply apologize for the inconvenience to our customers and flight attendants have suffered due to delayed or failed in-flight meal services. We will take full responsibility for the serious mishap," Chairman Park said in a press conference after making a deep bow. 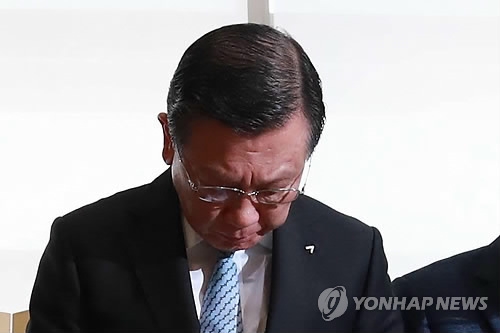 Since Sunday, 51 flights on Asiana Airlines's international routes have been delayed as in-flight meals have not been delivered on time. Some flights on short-haul routes have departed without meals, with passengers being given US$30-$50 vouchers, the company said.

Delays in providing meals -- or failure to provide them -- have continued this week, though the situation is improving with time, a company spokesman said.

Sharp Do & Co is now capable of providing 23,000 meals a day and aims to offer 30,000 meals during the peak summer holiday season next month. The in-flight catering company is a joint venture between gourmet entertainment firm Do & Co and Sharp Aviation K, Inc.

Last year, Asiana asked LSG to invest 160 billion won (US$143 million) in bonds with warrants from the group's holding firm Kumho Holdings in return for a contract extension. The request was aimed at securing extra cash to improve its financial status. But LSG didn't accept the offer as the funding was not for the airline unit but for the holding firm.

Asiana then partnered with HNA Group Co., Ltd. to set up a joint venture called Gate Gourmet to exclusively supply Asiana's in-flight meals in a 30-year contract. But a fire in the joint company's plant in March prevented its catering service beginning on time this month.