PYONGYANG/SEOUL, July 4 (Joint Press Corps-Yonhap) -- South and North Korea provided a glimpse of their potential joint women's basketball team at the upcoming Asian Games when their players competed together in an exhibition game in Pyongyang on Wednesday.

The Koreas started their two-day friendly basketball event with the women's mixed game at Ryugyong Chung Ju-yung Gymnasium in Pyongyang. The players from South and North Korea combined to form two teams -- namely "Team Peace" and "Team Prosperity" -- and competed to a warm welcome from spectators in Pyongyang. The audience cheered both teams, singing and hitting balloon sticks together.

Although the basketball event is mainly about promoting peace on the Korean Peninsula, and improving ties between the two sides, it was also an opportunity for people to have a look at what their joint women's basketball team at the Asian Games in Indonesia would look like.

The two Koreas previously agreed to field unified teams in three sports -- women's basketball, canoeing and rowing -- at the 18th Asian Games to be held from Aug. 18 to Sept. 2. 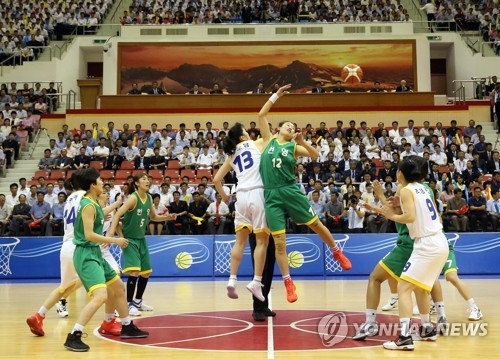 The two sides have yet to confirm the joint women's basketball team roster, but Wednesday's game showed the skills and characters of the North Korean players, who were relatively less competitive than the South Koreans. The South is ranked No. 16 in the latest International Basketball Federation (FIBA) rankings, 40 spots higher than North Korea.

At 205 centimeters, Pak is the tallest player -- regardless of gender -- in this basketball event. For Wednesday's game, she got nine points and eight rebounds in nine minutes for Team Peace. Although she wasn't quick, her height advantage was enough to score in the paint.

North Korea's Ro Suk-young also proved her talent by scoring a team-high 18 points to spearhead Team Prosperity's 103-102 win over Team Peace. Ro, who is listed as a center despite her 181-cm height, was the top scorer at the 2017 FIBA Women's Asian Cup Division A, averaging 20.2 points per game.

North Korean forward Ri Jong-ok was the top scorer in the game. The 26-year-old scored 26 points after playing 25 minutes, 50 seconds on the court. 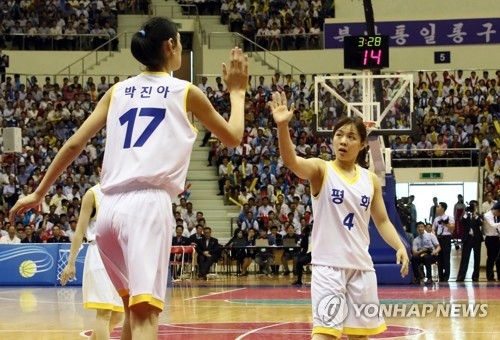 South Korea women's national basketball head coach, Lee Moon-kyu, said he believes the Koreas will produce good results at the Asian Games if the two sides can work harder together.

"I was impressed by Team Peace's No. 9 (Ri Jong-ok) and Team Prosperity's No. 7 Jang Mi-gyong," he said. "We have the same faces and use the same language. We will work harder under the name of Korea."

The women's basketball players will meet again on Thursday, but they'll compete against each other in their national teams.