The Koreas started their two-day friendly basketball event with the women's mixed game at Ryugyong Chung Ju-yung Gymnasium. The players from South and North Korea combined to form two teams -- named "Team Peace" and "Team Prosperity" -- and competed to a warm reception from spectators in Pyongyang.

Jang led Team Peace in the women's mixed game, but his side lost to Team Prosperity 103-102. The result, however, didn't really matter to Jang.

"We had wins and losses separately in international competitions, but I was really moved today that the North and the South gathered and played together," Jang told pool reporters in Pyongyang. "We didn't really practice together before the match, but I felt the greatness of the Korean blood after watching the players showed a good team work. I also felt a brotherhood through today's game." 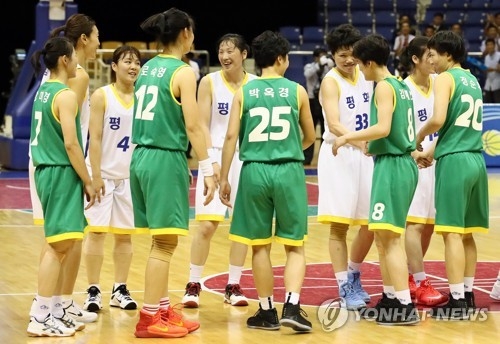 Jang said he was impressed by every move of the players including those from the South.

"Team Peace's No. 11 (Lim Young-hee) is an old player, but I was impressed that she really sacrificed for the team," he said. "Team Prosperity's No. 2 (Park Ji-hyun) is young, but she worked hard to help in her team's victory. If we can join hands together, we might see bigger results."

The South and the North previously agreed to send a joint women's basketball team to the upcoming Asian Games in Indonesia. Though it wasn't a competitive contest, Wednesday's game gave a hint of how the joint Korean team would look at the Asian Games.

"There's a song lyric that the North and the South can't live when they're separate, so if we can unite as an one team, I firmly believe we'll produce good results."

North Korea's Ri Jong-ok, who scored a game-high 26 points for Team Peace, said that she was also happy that the two Koreas played together.

Ri said both North and South Koreans played a good game. After the match, South Korean head coach Lee Moon-kyu pointed out that Ri was one of the North Koreans that caught his eyes.

"I was happy when I saw the players cheer together," she said. "If we can unite our hearts and thoughts, I think we'll be able to show Korean people's courage and wisdom (at the Asian Games)."