SEOUL, July 5 (Yonhap) -- A Seoul court turned down a prosecution request early Thursday for a warrant to arrest a prominent opposition lawmaker on corruption charges.

The Seoul Central District Court denied the writ against Rep. Kweon Seong-dong of the main opposition Liberty Korea Party (LKP), saying that the accusations were disputable and that he presents a low risk of fleeing or destroying evidence.

The three-time lawmaker is accused of pressuring Kangwon Land Inc. in late 2013 to hire his two former aides and 16 others, including children of his high school friends. Prosecutors filed for a writ in May on charges of abuse of power, bribery and obstruction of business.

Appearing at the courthouse for arraignment on Wednesday, he made an apology to the public for causing concerns but flatly denied involvement in the alleged illegal recruitment.

The case took a twist last week when Kweon offered to give up his privilege and show up for the arraignment.

The high-profile scandal has spawned the launch of an independent prosecution inquiry after a prosecutor who was probing the case revealed that it had already been compromised by Kweon, chairman of the parliament's judiciary committee, and by ranking prosecutors.

The independent probe team has been at odds with sitting Prosecutor-General Moon Moo-il and has publicly accused him of blocking their investigation into the top prosecutors implicated in the case. 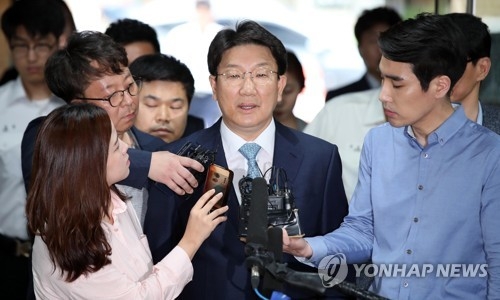