The Koreas started their two-day friendly basketball event at Ryugyong Chung Ju-yung Gymnasium with mixed games. The players from South and North Korea combined to form two teams -- namely "Team Peace" and "Team Prosperity" -- and competed to warm reception from spectators in Pyongyang.

"If feels like something special that we're having this good event through basketball," he said. "It's an honor for me to play in this match and I'm happy that it became a memorable day for us."

The men's game ended up in a tie, with each team scoring 102 points. Heo, who played for Team Peace scored nine points and made two steals in 17 minutes on the court.

"Instead of thinking about winning or losing, we just enjoyed our time, and we're happy that we played together," he said. "Being one through sports is a happiness that I can't really describe."

At the gymnasium, Heo was with his family. His father Jae is the South Korean men's national basketball team head coach and was leading Team Peace in Wednesday's game, while his younger brother Hoon was playing for Team Prosperity.

For Heo's father, it was his first time visiting the gymnasium since 2003. Hur Jae was then a player and competed with North Korea's star center Ri Myong-hun, who is known for his 235-centimeter height.

"My father also told me that it just feels good to play a match here, and I hope we can have many opportunities like this," he said. "I also felt proud when my brother and I were introduced on the court."

For the game, North Koreans packed the 12,000-seat gymnasium and showed avid support for each team. They cheered, singing songs and hitting colored balloon sticks together to spice up the atmosphere.

"They really gave us a lot of energy," he said. "It was great to receive support from fans, and that's why I was able to give more effort in the game." 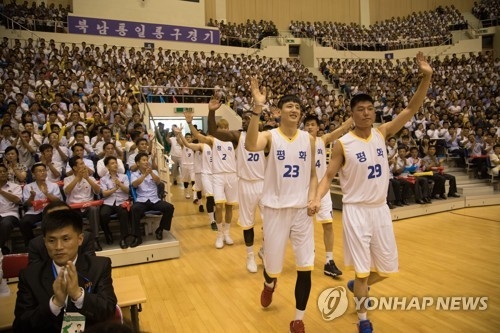